Grandma is getting old. I have lost touch with almost all of my cousins. My lost-soul-swimming-in-a-fish-bowl kept on adding bricks to the walls of my own cage. Sounds stupid but yes, I cry over, mourn over those long lost hang-outs and hullabaloos and soul-food at Grandma’s shrine. 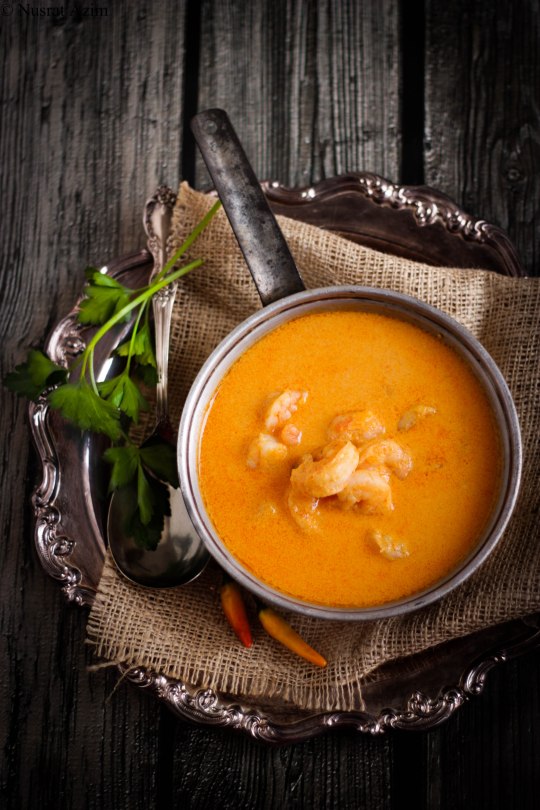 “There is no love sincerer than the love of food.”  ― George Bernard Shaw, Man and Superman

‘The Living Legend’, my grandma, loves to feed us to death (out of love) in every single winter holiday bash at her place. The entire herd of us cousins (that would be 26 in number) would follow her throughout the week, as if, she is the pied piper of Hameln. Such is her mesmerizingly powerful presence. Such is the soul-soaring taste of her home-cooked food. Especially the creamy-pillowy-lovely-light Shrimp Malaikary shall live forever as a ‘Hall of Fame’ in our family 🙂

THE ‘Heartthrob’ of the party: Shrimp Malaikary. So real ! so rural ! So refined! So unpretentious ! Uncomplicated ! Look how creamy coconut, tangy lime and earthy spices doing waltz with those Shrimps !

When the sun sets its last ruby-red hue on the talc-white flock of clouds in the azure December sky, she would tell some ‘so old yet so new’ fairy tales. We would sit in a circle on the well-worn concrete floor underneath those larger-than-life emerald brunches of her ancient mango orchard. She would ask us about our love life and the recent blunders we made at work. She would share her concern about technologically advanced but loveless, robotic outside world. When the soundtrack (chirping and tweeting of birds) fades away, a pale moon rises across the sky, she would serve dinner.

For every well-known dish in our region, my Grandma has her own rock ‘n roll, divine version which is ruled by magic 🙂 Creating a flavorful bomb-dish by using minimum spices is an art that requires precision and skill (which I don’t have like my Grandma) and I guess, it would take me a light year to replicate her flavorful, tasty as well as visually appealing Shrimp Malaikary. Keeping in mind that it is humanly impossible to give it the exact same luscious texture, exact same not-scary-hot heat, exact same intense aroma, I give it a try pretty often.

Red chili paste: ½ tsp (use paprika, if chili doesn’t work for you)

Salt and sugar to taste

1. Wash, clean, peel and devein the prawns. Pat dry. Sprinkle a little salt and turmeric powder on prawns. In a pan, in hot oil add the prawns. Fry for 2-3min on high heat until they turn red. Keep them aside.

2. In the same pan add more oil. Pour the paste. Cook for 7 minutes in high heat, then add coconut milk.

4. As the gravy boils, add the fried prawns. Cover and cook on low-medium flame for 3-4min. Add salt and sugar. Sprinkle parsley.
5. Serve with rice.

There’s something seductive, sensual about this slightly red, pleasantly hot Shrimp curry. An incredible mixture of subtle taste and majestic appearance. Un-overpowering but powerful and grand enough to win your heart; just like Grandma’s love. A delightful string to be attached with for the rest of your life ♥